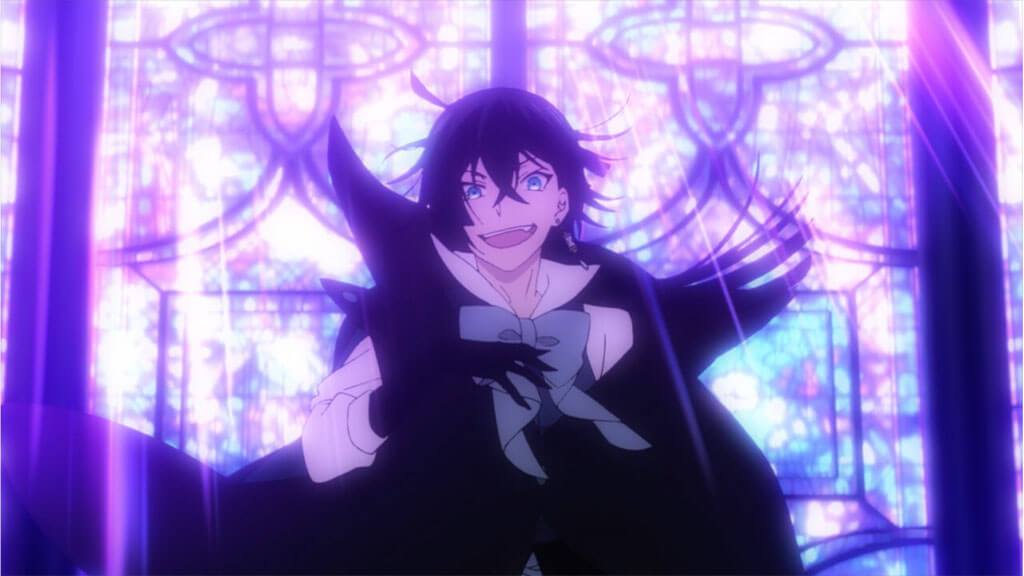 The Case Study of Vanitas (Vanitas no Karte) is a supernatural vampire fantasy TV series animated by Studio Bones which is enough to get excited about it. It is based on a manga series which is written and illustrated by Jun Mochizuki. She is also the author of Pandora Hearts.

There was once a vampire named Vanitas who was despised by his own kind. Others of his kind were born on the night of the crimson moon, but he alone was born under the blue moon which was a sign of ill omen. The other vampires hated Vanitas and drove him away from the village.

Wandering alone in the woods he faced terrors of darkness and cold clutches of the snow. So, it was that he made a vow. He would take revenge on vampires born under the crimson moon.

“O foolish vampires who have persecuted me! Opening this grimoire shall visit upon you a curse worse than death!“

After watching the first episode I can say this is definitely going to be one of my most anticipated shows of the season!

The dynamic between the two main characters and the comedic style is so refreshing and familiar.

So, without wasting any more time, let’s see the best anime like Vanitas no Karte.

D-Gray man is a show which is definitely higher on my list, the plot is much darker than any of your average shounen anime, in the first episode we see an enemy who is merciless and won’t hesitate to exploit any weaknesses.

Both shows have a similar character dynamic and the main character holds great power but is in need of allies.

They both deal with a similar plot of helping people, saving them from the darkness which corrupts their souls.

Also, they have very similar drawn characters who have somewhat similar personalities.

Losing someone you love is difficult and you wonder if you can resurrect them. It’s an emotion that enigmatic Millennium Earl exploits to trap souls inside ‘Akuma’ a mechanical weapon that uses the souls of the dead that are called back. The only way to save them is with the Anti-Akuma weapon known as “Innocence”.

It isn’t very common to see a high-quality show like B: The Beginning takes such risks, I was hooked on the story with each episode as more mysterious unraveled.

However, it’s very easy to get confused in the story because there is so much going on, it is a game of cat and mouse just like Death note.

Both these shows have a similar supernatural aspect though set in a completely different setting.

Great story which keeps me on edge, both characters have a past that is unknown and which will unravel the mysteries of who they are.

Both main characters are driven by a motive that is a complete mystery.

A carefully created better human vigilante roams the streets, loved by some and feared by many the notorious ‘Killer B’ takes justice into his own hands. With his superhuman abilities and a sharp blade, no one is able to apprehend him.

To help with the situation an expert detective– Keith Flick is called upon to uncover the case where he begins to unravel plots regarding the secret organizations and human experimentations.

Bungou Stray Dogs is definitely a show worth watching, everything about the show is definitely amazing with the incredible story and loveable characters which you can definitely relate to, it’s fun to watch and is quite entertaining.

The overall dynamic between the two main characters Dazai and Kunikada feels really similar to Vanitas and Noe.

There is a certain comedic element to both shows which is very similar to one another which is really refreshing.

It’s about a group of guys who go around town solving crimes or stop bad people from using their powers to hurt others i.e vampires.

Atsushi Nakajima lives in an orphanage which is plagued by a strange white tiger, suspected to be behind this incident he is kicked out of the orphanage, on the verge of starvation wandering through the city he saves a rather eccentric man by the name of Osamu Dazai who is a suicide enthusiast but also a supernatural investigator who is also curious about the mysterious white tiger.

What do you do when your entire world falls apart on your 15th birthday and you’re pushed into a broken box chased by strangers you barely know, with no clear path forward. How do you pick yourself up and move?

Not only is it created by the same author there is a very familiar atmosphere and feel to it. Some of the characters also feel very similar in terms of personality and looks.

Both shows appear to be happening around the same time period aka the 19th century, while Pandora hearts happen in England, Vanitas no Karte in France.

Both shows follow a mysterious young boy who is driven by a passion because of the tragedies that happened hundreds of years ago.

15 years old Oz Vessalius is your typical arrogant selfish kid who indulges himself in pranks all day, on the day of his birthday he is forced into an abyss by some strange beings. Trapped into a hellish alternate dimension.

Black Butler is one of the most popular shows of all time. Everything about this anime is amazing from the story to loveable characters and Gorgeous music. It is very easy to get hooked after you watch the first two episodes. The Victorian age setting is quite impressive.

Both these shows have a very similar vibe in terms of

In both these shows, we have a pair who go around dealing with supernatural beings, also one of them is a normal human and the other is a vampire/demon.

Ciel Phantomhive is a competent young boy whose job is to take care of the unsettling event which takes place in the Victorian England city, along with his butler Sebastian who is not quite a human.

Together they will get the job done with whatever means necessary.

Owari no Seraph is your average vampire anime which is quite amazing if you do not give attention to detail and just want to enjoy it. The story of the show is a copy of Attack on Titan and the characters are very dull to say the least.

There is nothing particularly similar about Vanitas no Karte and Owari no Seraph but the story is about hunting vampires. I wouldn’t normally recommend watching this but if you’re just looking for a vampire anime, this is for you.

A mysterious virus appeared which killed everyone above the age of 13, the story follows a young boy by the name of Yuuichirou along with the orphans who he considers a family that lives as livestock under the reign of vampires.

They all make a plan to escape which of course fails, the only survivor to escape is Yuuichirou.

Moriarty is definitely a show you would wanna watch, there is no question about it. I can tell you that if you like Vanitas no Karte, you will definitely enjoy Moriarty the patriot.

His ambition is devilish, he acts like a villain and kills bad people, here’s to William James Moriarty.

Both shows have some very elegant and graceful male characters who are somewhat similar in personality when it comes to doing the deed.

There is a very strong theme of mystery and darkness that lurks within the character’s motives.

There is a historical theme set in the UK around the 19th century,  the difference is that Vanitas is about Vampires where Moriarty is certainly not.

During the 19th century, Great Britain has become the greatest empire the world has ever seen and runs through an economic hierarchy that dictates the value of life and everything within and no to one’s surprise the ones who sit on the top have no intention of ever letting the working class to ascend the ranks.

It is always exciting to watch new vampire anime where the vampires are done right, there is a hierarchy among the nobles and the lower class vampires. Sirius the jaeger is an amazing show in regards to the story and characters.

Both shows follow the story of a young boy who is driven by his past to take revenge on the monstrous beings called vampires.

Sirius the Jaeger have somewhat relatable characters who you would want to be friends with, the dynamic between them is similar to Vanitas and Noe.

Both main characters are determined who have forged their own path to follow and will not back down.

Our young protagonist by the name of Yuliy lost his family to a vicious vampire attack where he was the sole survivor, on the verge of death he was saved by a man named Willard who encouraged Yuliy to fight and take revenge on the vampires.

Yuliy joins the Jaegers– a group of individuals who are tasked to hunt down vampires around the world.

Never have I seen an anime that has captivated me so much that I never wanted it to end. The overall environment and characters are so amazing and how they handle any situation with such class.

Both shows have somewhat a similar environment with certain comedic instances and a story that follows a young boy who inherited a great gift from a strong being.

Both characters are roped into dealing with troublesome monsters and vigilantes and keeping the city safe.

The character dynamic is amazingly similar between the two main characters who are paired with someone totally opposite but they try to get along.

The story follows a young boy named Leonardo Watch who has come to Hellsalem’s Lot formerly known as the New York City in search of answers about the mysterious power he obtained “ The All-Seeing Eyes of The God “ at the cost of her sister’s eyesight.

During his first visit to the city, he runs into Libra (a vigilante organization) and joins their ranks hence starting his new life in Hellsalem’s Lot.

I love sports anime and love writing about them.

it’s been weeks and i haven’t gotten over from Vanitas no Carte! having hard time looking for somewhat similar/parallel animes until i found this susume!! doumo dono!

Glad I could help!

Umair Shahid
My name is Umair. Just your friendly anime writer, I love anime and anything related to it. Big fan of sports and military genre.

"Even though my life hasn't been all that great, I figure that I live long enough, something good might happen."